Vol v.1 The history of the island of Antigua by Oliver, Vere Langford

Published Updated tháng 11 15, 2018
Tags
PDF files
The history of the island of Antigua

The history of the island of Antigua, one of the Leeward Caribbees in the West Indies, from the first settlement in 1635 to the present time 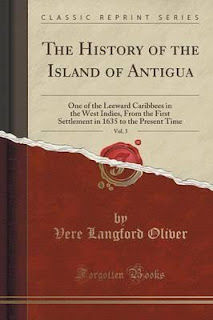 THE various Papers and Pedigrees comprised in these two Volumes have been gradually
accumulated during the last seven years. Having commenced by collecting information
about my own family, which was formerly settled at Antigua, I was soon led to make notes
of many others connected by marriage, and finally to compile the Pedigrees of all those
formerly resident there. I then visited the Island, and during my stay from December 1888
to March 1st, 1889, made copious extracts from the parish registers and local records, besides
copying all the monumental inscriptions in the various churchyards and plantation burial-
grounds. Here I gratefully record my thanks to Sir William Frederick Haynes-Smith, the
Governor of the Leeward Islands; to Captain I. C. Maling, then Acting-Secretary; to
Mr. Octavius Humphrys, the Registrar of Wills and Deeds ; to the various Rectors ; and to
my kind friends Messrs. Thomas Dickson Foote, John Foote, Arthur Shand, Oliver Nugent,
John Jarvis, and others.

The information thus acquired on the Island was subsequently largely augmented by a
search through the Colonial Papers at the Public Record Office, Mrs. Vernona T. C. Smith
materially assisting by making extracts for me from the Close Rolls ; and my thanks are
also due to Mr. Chaloner Smith, the head of the Literary Search Department at Somerset
House, for his uniform courtesy and help.

In regard to the Historical Introduction which follows, I have endeavoured to give as
much original information as possible ; most of it is in a very crude and condensed state,
but I have purposely avoided putting forward my personal opinions, deeming it better for
each reader to form his own. As to the Pedigrees, I must point out that some of them are
unreliable, owing to the absence of sufficient proof, but I shall be very glad to receive corrections
and additions. The first Volume has taken the Publishers over two years to print, but the
remaining one will be probably completed next year.