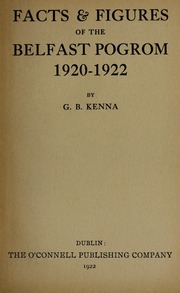 The object of this little volume is to place before the public a brief review of the disorders that have made the name of Belfast notorious for the past two years. A well-financed Press propaganda, clever and unscrupulous, taking advantage of the disturbed state of the public mind and the pro- verbial shortness of the public memory, has already succeeded in convincing vast numbers of people, especially in England, that the victims were the persecutors — that Abel killed Cain. The incredible has indeed been accomplished. Those vast sums have not been spent in vain.

It would be folly to hope that any dissemination of the truth can ever undo the effects of such propaganda. But it is surely due to the poor, suffering minority in Belfast that some effort should be made to put a fair statement of their case before the outside public. An honest effort is made to do this briefly here.

This book is compiled mainly from first-hand knowledge, but there is hardly anything in it which one may not verify from current reports in the unprejudiced Irish or British Press.

What the Catholics of Belfast would desire most of all, and what they have repeatedly asked for, is an impartial tribunal set up by Government to investigate the whole tragic business. Sir James Craig's Government would never consent to do that. Would it be too much to hope that — considering the magnitude of these outrages, and the helpless civic condition of the Catholic minority — an Inter-national Commission should be appointed to take it in hand, such as was set up for an inquiry into the Turkish outrages in Anatolia ?